After clonking away on a 22 hour train ride from Moscow, I finally found myself in Siberia. In the end, the landscape here is not as exotic as one might expect. In fact, if you were to clubber me unconscious with a rusty pipe and throw me out of the train, I might be convinced that I’m back in Finland. Forests of pure white birch trees, endless fields of snow, the occasional smattering of pines, houses and factories in various stages of dilapidation. Even the mighty Ural Mountains seemed more like their shy Lappish counterparts, at least in these more humble parts of the mighty mountain range. 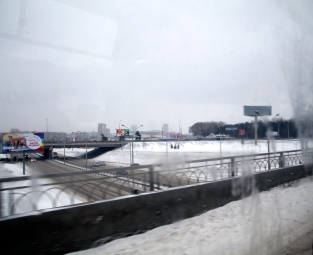 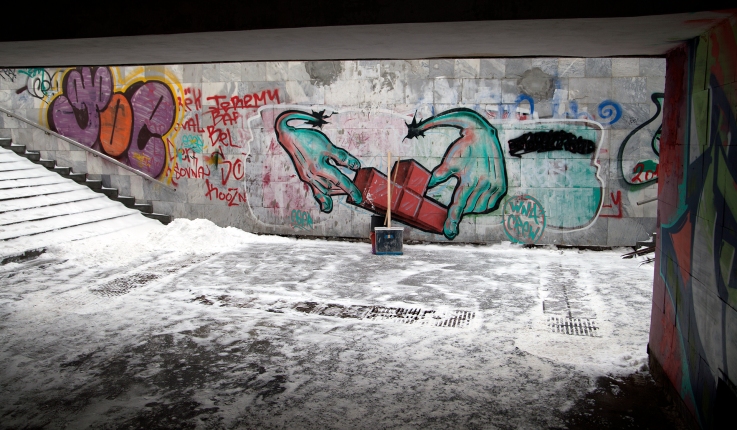 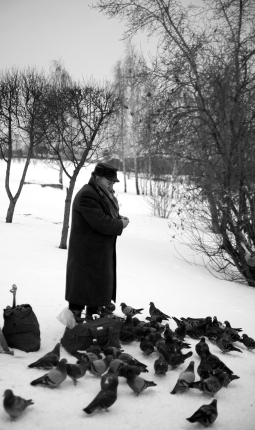 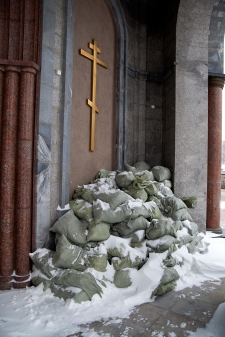 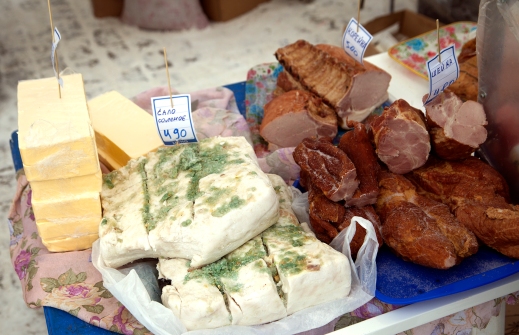 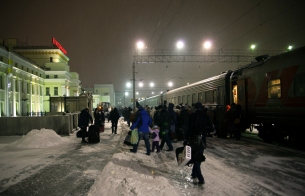 Yekaterinburg lies in the western most part of Siberia, immediately after the Urals just on the Asian side of the Eurasian continent. Arriving there at night, the streets seemed quiet and confident. The same streets had been shared by the last living members of the tsar family in their final days, before they’d been forcefully put underneath the dirt. After arriving at the local hostel, I was immediately greeted by a naked man with a vast stomach and miniscule penis named Oleg. And another man, Kirim, who was so intoxicated that even the locals couldn’t make sense of his words. The following day, Kirim had vanished, only to return again at night in the same vodka induced condition, all full of hugs and happy songs. I miss that man.

The morning revealed a nice open air market, where locals traded in fishes, meats, cheeses and various things hidden away in vans. In terms of architecture the city is much like all Russian cities, a mix of very old, soviet and modernist buildings.  Despite having undergone a huge build-up of factories during the most worrying stages of World War 2, Yekaterinburg feels more like a university town than an industrial ghetto. All and all, the city is very pleasant, apart from the penetrating Siberian wind.

The wind is not the only wintery problem one is forced to face with in Siberian cities. Unlike in countries and cities of North-Western Europe, Siberians don’t apply grit or salt to their sidewalks. As a result I’ve ended up slipping and sliding on my ass more than a few times, like a baboon trying to balance itself on a beach ball. The problem is made worse by the pure amount of ice on the streets. In parts the ice may be 10 centimetres thick, with ridges and slopes all around. The Siberians have my utmost respect for enduring these conditions. 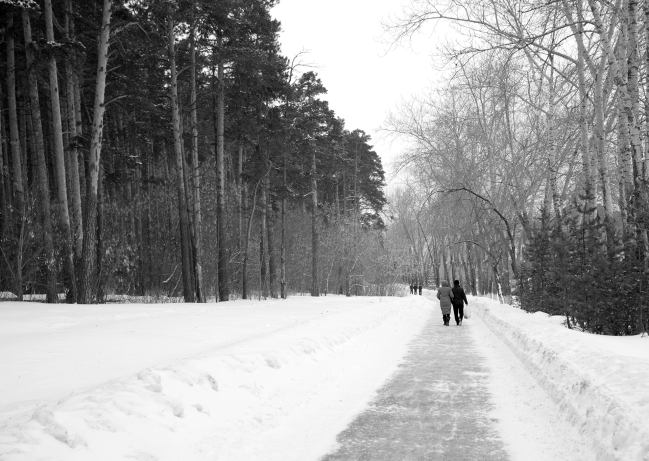 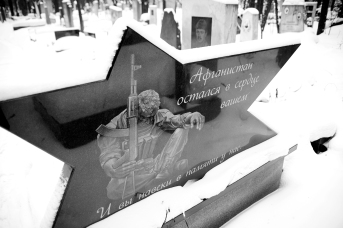 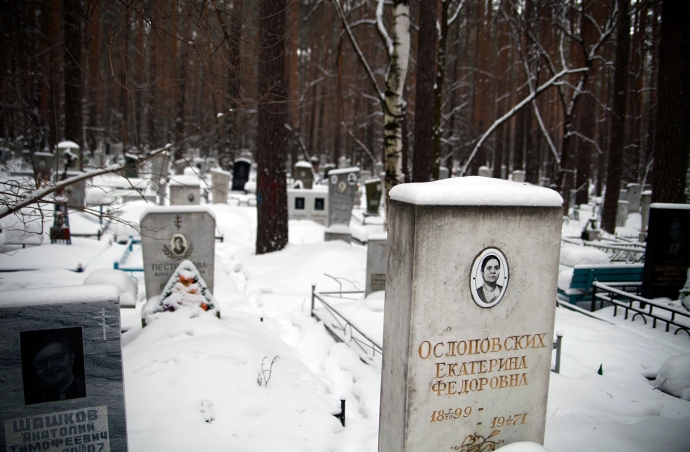 Even though Yekaterinburg was quite quaint, I felt a strong need to head a ways outside of the city limits, to the famous cemetery site close by. On internet forums and tourist guides, the cemetery of Yekaterinburg has been nicknamed “the Mafia cemetery”. This is because a large number of former members of the mafia, specifically the Dagestani mafia, are buried there under impressive monuments of men in leather coats. Admittedly this is what drew me to the place. I was maybe hoping to catch a few interesting pictures, and have a quiet internal giggle at the expense of the narcissism of past souls.

What I found at the site however, was a sense of peace and quiet I’ve not previously felt on this trip. The cemetery is located in a beautiful Siberian pine forest, with graves dotted all around the trees. The hollow ticks of a woodpecker somewhere close by, peacefully falling snow and a stray dog the size of a large boar were my only company there. Total silence. Most of the graves were those of the war generation; of people either taken by the war, the camps or the hunger. These stark reminders somehow made the admittedly bemusing Mafioso graves quite irrelevant. The site is definitely worth a visit, but not for the reasons travel guides advertise.

I was again reminded of the mafia graves, upon waiting for my next train at a rundown cafe near the Yekaterinburg train station. There I was served bland tea and dry chicken skewers, along with the company of a gang of maybe eight men, wearing the same sports and leather jackets featured on the graves at the cemetery. One of these men, who had the most intelligent eyes of the bunch, was constantly running in and out of the establishment with his phone in hand. The rest had bruises on at least one part of their face, caved-in noses and stabby arms. Two men from the Russian armed forces walked in. “Closed, closed” yelped the girl behind the counter, as conversation ceased to a pin drop silence at the table the jacketed gentlemen had just a minute ago been sharing their best face pounding techniques. The young men in green left, the cashier wiped away a worried a sweat and the jacketed men resumed their stories. I decided this to be the time for me to leave, after first thanking the visibly shaken cashier for the tea. 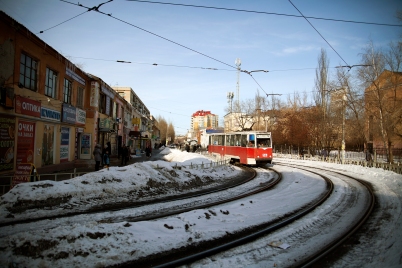 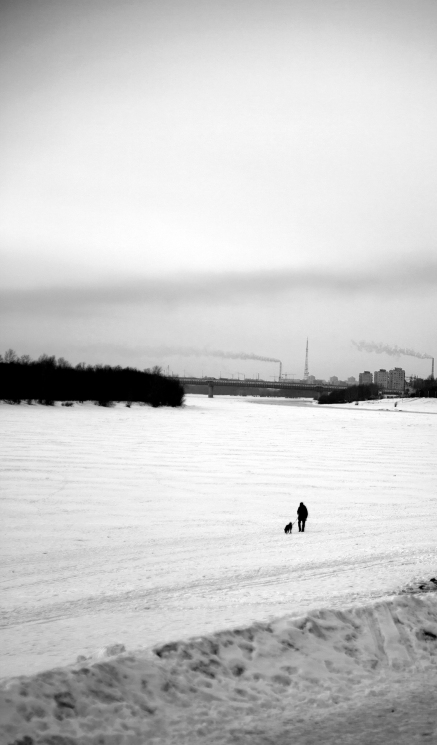 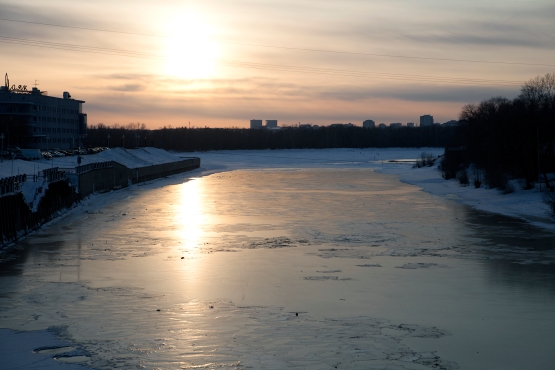 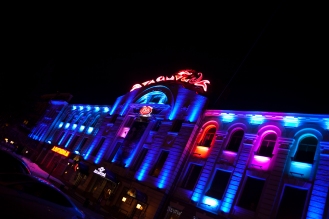 The Siberian weather brought a feverish cold on me, which I’ve luckily been able to shake since. I mainly attribute the +28 centigrade conditions on the Yekaterinburg – Omsk train for sweating the illness out of me. Upon entering Omsk, I was quite eager to relax in my first private room of the trip. As things go however, I couldn’t resist the appeal of an unknown city, and wandered the streets of Omsk for the better part of eight hours. Omsk is an incredibly weird mix, in parts almost resembling a fishing village from the Middle East with winding alleys of street stalls and cobblestone boulevards. The center of the city is of course more modern, or relatively more modern at least. This was not the best time to visit the city, as there was huge renovations going on all around. You couldn’t even cross the main road due to roadworks.

What Omsk lacks in architectural beauty, it makes up for in the beauty of its residents. Now I’m going to try to be as courteous about this as I can, but simply put Omsk has the most beautiful women I’ve probably ever seen in one city. Siberia in general has been described by some as a “supermodel factory”. This is due to its past as the industrial factory of the Soviet Union during World War II and the Cold War. Working these factories, were a mixed group of “relocated” people from all around the former soviet countries in Europe and Central Asia. This dark history has resulted in a population with maybe the most varied and healthy gene pool in the whole world.

Apart from effecting the looks of the people in Omsk and Siberia, the mass relocation also brought food cultures from all around the world to these formerly barren steppes. In Omsk I enjoyed the best meal I’ve had in Russia. The delicious dumplings were the cultural pride of a minority of some Central Asian country which I’ve regrettably already forgotten.

All of what I’ve mentioned above has left me with the strong first impression, that Siberia is not some long forgotten industrial ghetto in the middle of nowhere. Instead Siberia feels very much like a territory progressing, but towards what I don’t know. My guess? Towards the east and southeast. A bit like myself, so that’s where I’ll continue. Towards Lake Baikal.