As a traveler with reasonable experience of various land, water, air, and underground based modes of transport, it’s not that common for me to experience something totally new in this field. I’d become aware of BlaBlaCar during past trips around Europe, but had never actually embarked on a journey through the service.

During the previous days I’d been astonished at the high prices for buses headed to and accommodation in Seville. Easter was still a week or so away, so it didn’t seem to me like a particularly high tourist season. After securing a horrendously expensive hostel bed in Seville ahead of time, a friendly BlaBlaCar driver offered the cheapest, friendliest and fastest means of transport from Lisbon through the Spanish border.

After a few hour car ride in the back of a Renault, getting sick on sweet strawberries and talking to locals headed for Seville, one question popped up again and again.

“What are you doing for Semana Santa?”

I’d read about these festivities in vague terms in the past. Some sort of party the local Christians like to throw. As I hopped out of the car into the pleasant heat of Seville, I was immediately dragged into a river of humanity marching towards the city center.  After fighting against the current of people for an hour or so, taking long detours around bridges and city squares, I was finally able to drop off my bags at a nice hostel and continue exploring this bizarre event with some lighter gear.

It became quickly apparent that there was no hope of exploring the city itself. The celebrations had thrown any notion of normality out of the window. Shops, museums, and sights were all closed and walking just three blocks took some deliberate planning around crowds and roadblocks. The immense and distractedly policed crowds also made me consider the threat of terrorism for the first time on one of my trips. A large Christian celebration like this, where a bearded and travel-worn man like myself was able to walk about with a large bag hoisted over the shoulder seemed like a frightfully soft target if I’d ever seen one. I did not let these thoughts affect my actions, as I try to always do, but the mere fact they rose to my mind made me disappointed and disgusted.

As I reached the parks surrounding the core of the city, echoes of ominous drumming and the wail of horns started to reach my ears. Suddenly, as I was chowing down a street-side bocadillo on a concrete fence, the men in hoods appeared from behind cork trees. My cultural indoctrination by US mass media immediately had my mind going to one infamous club of folks famous for similar attire in the south of the USA. This made it jarring to see first tens, then hundreds and finally thousands of folks marching down avenues like the Galactic Empire. 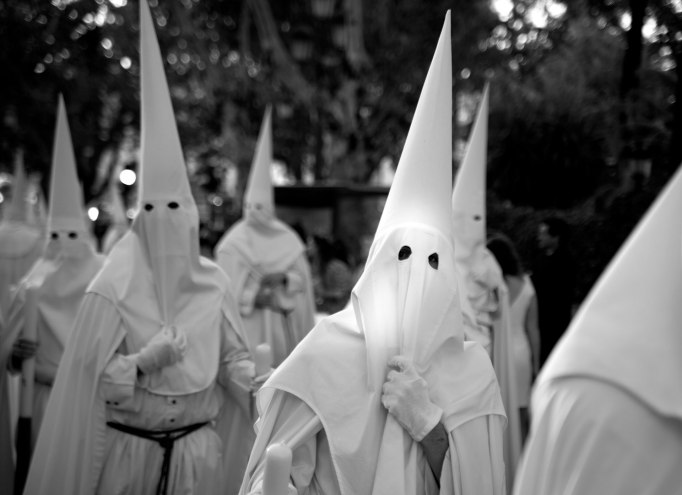 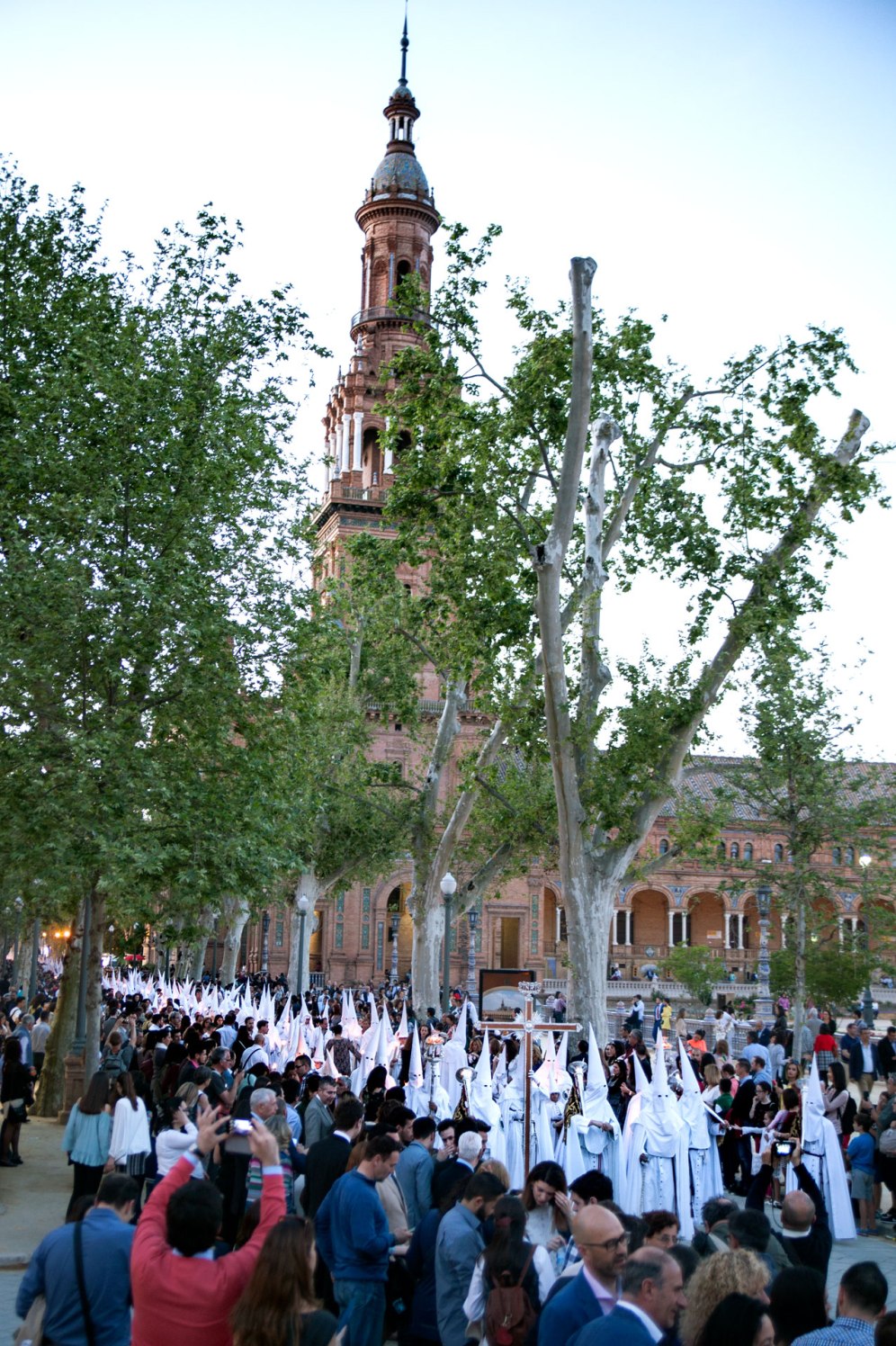 As day turned to night, the torches and crosses as black as tar came out. The hypnotic music, intricate costumes, smell of candlewax and night sky slowly filling with stars brought me to a state of total trance. Before I knew it, I’d walked up and down the processions for hours along with the wading crowds dressed in their finest Sunday attires. The city had absolutely vanished from my eyes behind the veil of the celebrations. 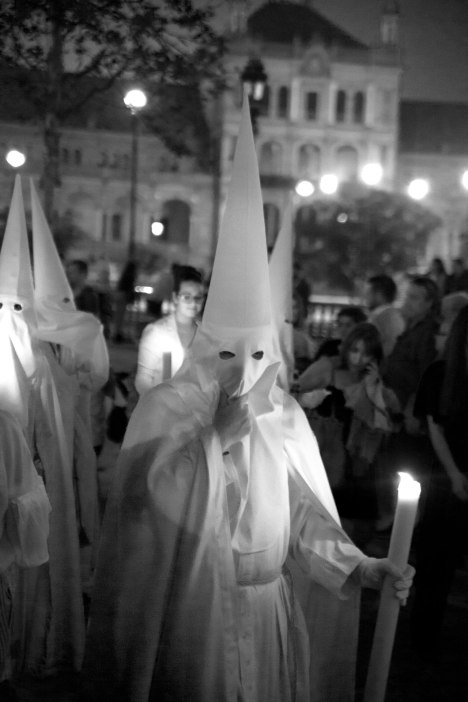 When shuttling myself between avenues I was able to find the odd quiet alley or two to drink in the architecture and natural ambiance of Seville. I even stumbled upon a lost bar in the corner of a petite street looping around itself. The place had seating for a dozen, but in it only two gentlemen dressed in tweed and leather enjoying some simple beer and tapas. The owner haphazardly smoking a cigarette while following a football game in a tiny 4:3 TV. The restaurant and the celebrations engulfing the city had seemed to have forgotten one another. A small beer please, with a simple omelette on the side. A moment to relax, and then, back into the fray. 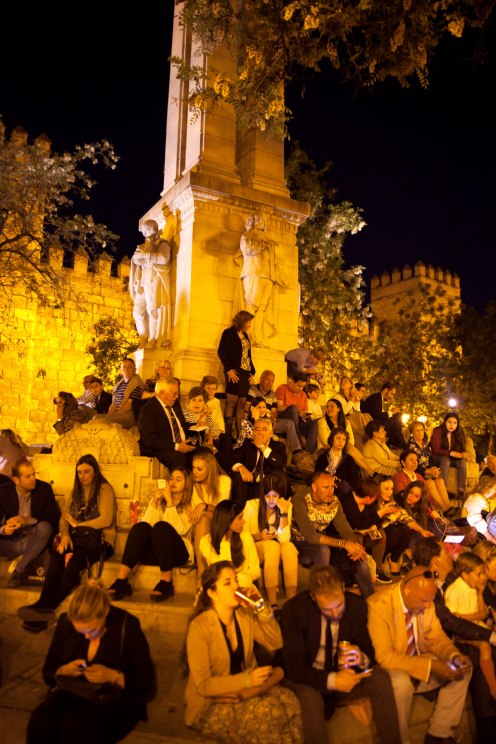 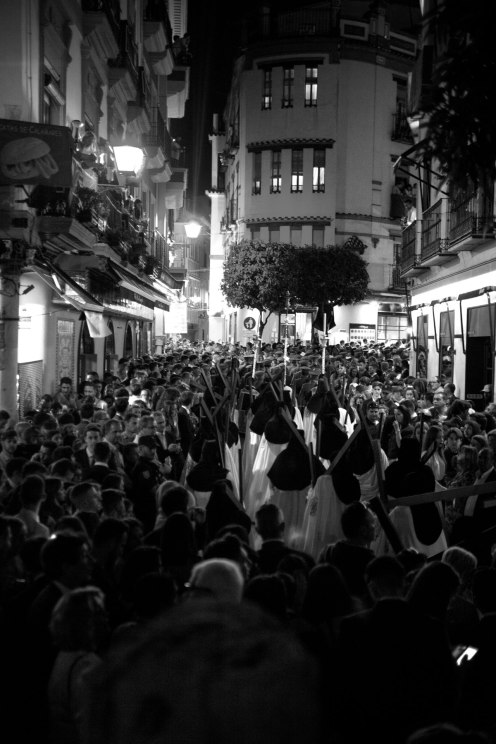 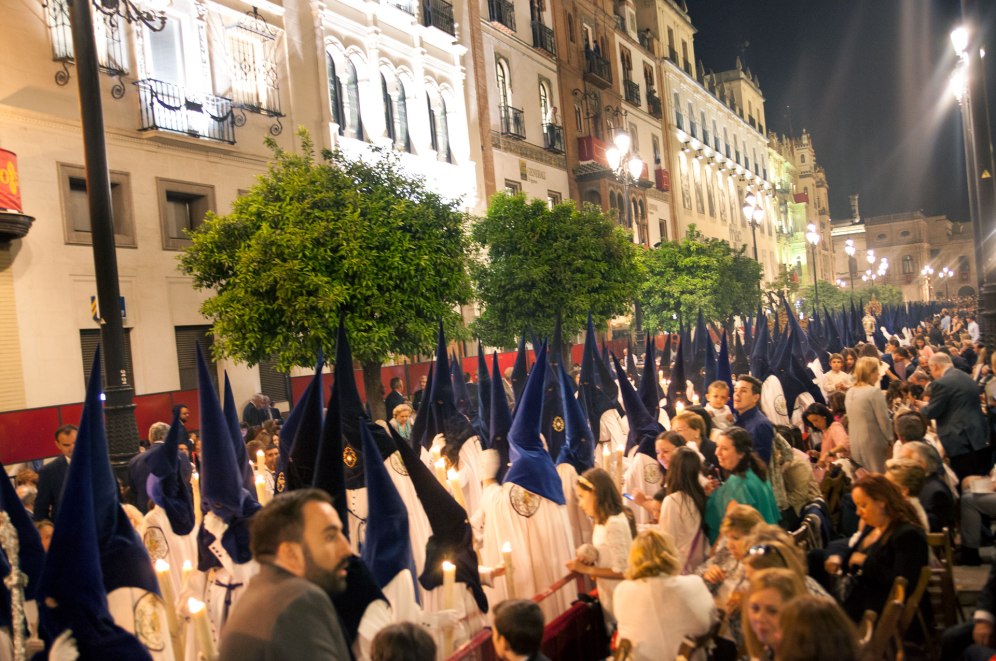 That night in Seville dragged deep into the early morning, varnished by small cups of wine and slightly larger glasses of beer. I was however able to wobble out of my bunk and bus my way a little further south, to the old fortress city of Cádiz. I’d chanced upon but a few photos of the city before my visit, which made the sight of the beautifully salt-soaked buildings against a perfectly hued Atlantic a particularly striking surprise. 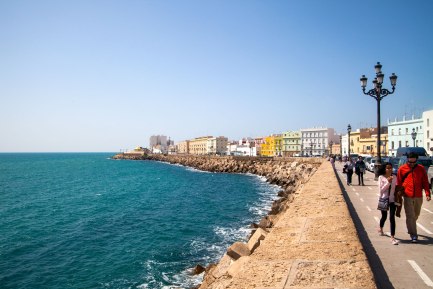 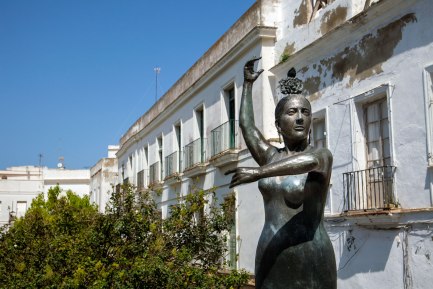 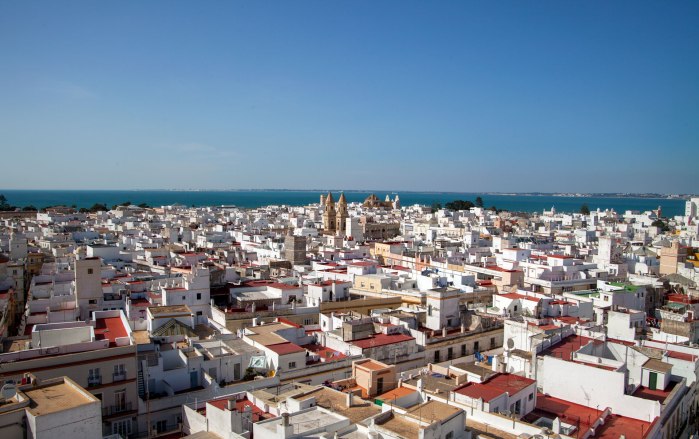 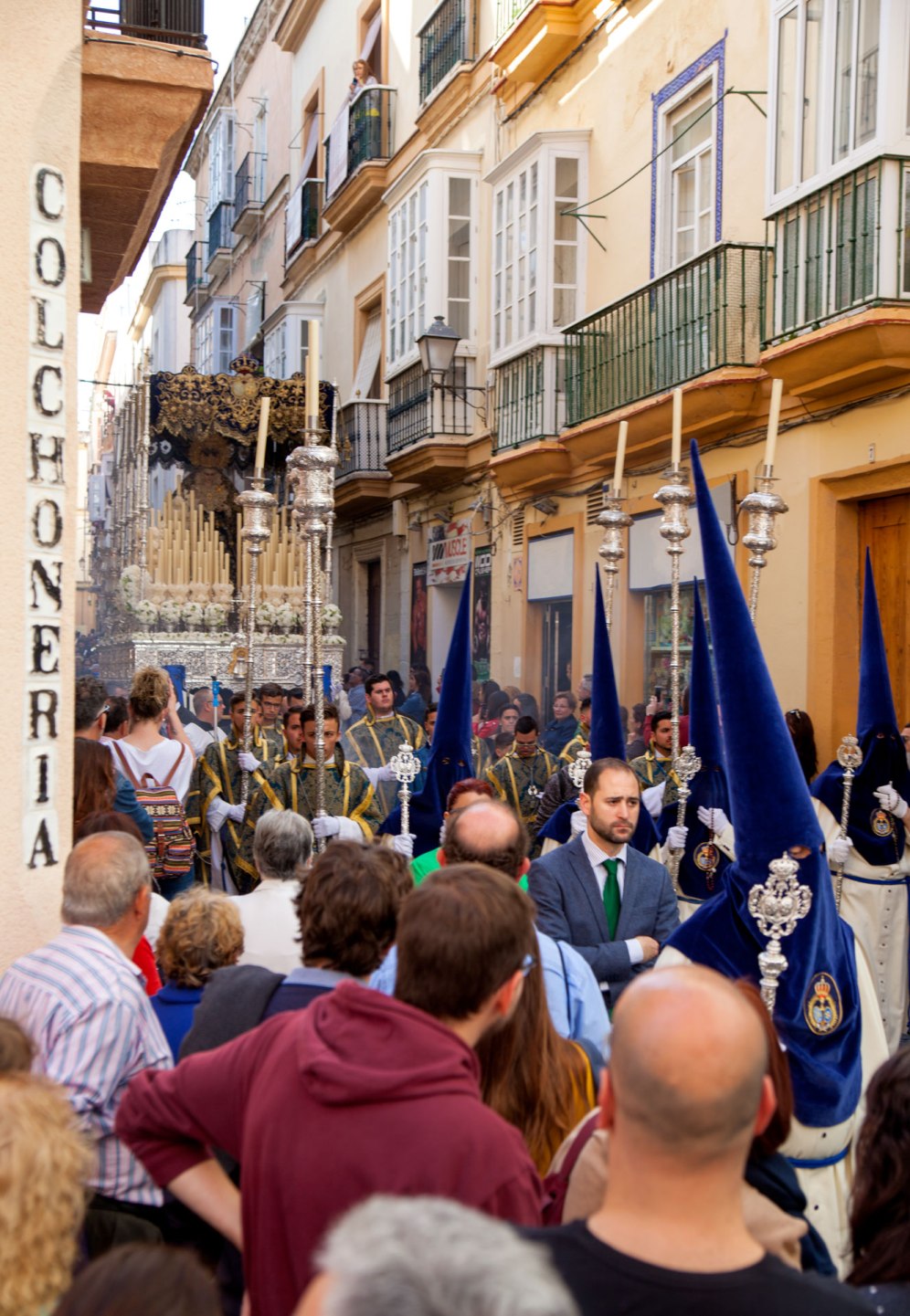 When enjoying the quiet of this smaller and more nautical city, I was from time to time reminded by the looming celebrations lurking behind alleys and streets. A perfectly peaceful stroll among streets humming with sea wind could at any time be violated by a rush of processions with horns, floats, and drums throughout. To escape this, I ventured out to the very tip of the city with three particularly well chilled beers in my bag. Hugging the side of a breakwater looking out at sea with a lighthouse winking at me like the pulsars on the sky, I welcomed the escape of the sun from the rising moon. 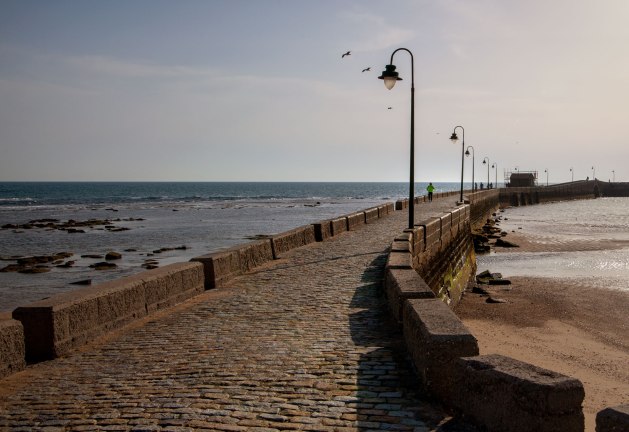 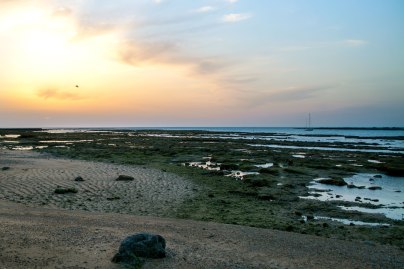 Having relaxed myself in the chilled sea air and similarly tempered brews, I was once again prepared to venture into the madness of it all. The rising sound of drums had already begun to echo against the still water as I was sat against the breakwater. Now, walking closer to and into the alleys, the drums were joined by the increasingly familiar and distinct tones of horns. I faintly believed it to be possible, but the celebrations in Cádiz were even more energetic, more frantic, more wine soaked and more heated than those in Seville. The tight alleys funneled people into one another, small corner bars were flushed through with hoards of revelers like locusts and the cobblestone streets themselves seemed to bend and heave under the weight of the crowds. A glass of wine and tapas, a short march in the stream of one procession, a beer there, swerving into a different alley with yet another tone and float, a short catch of breath next to the sea, rinse, repeat. 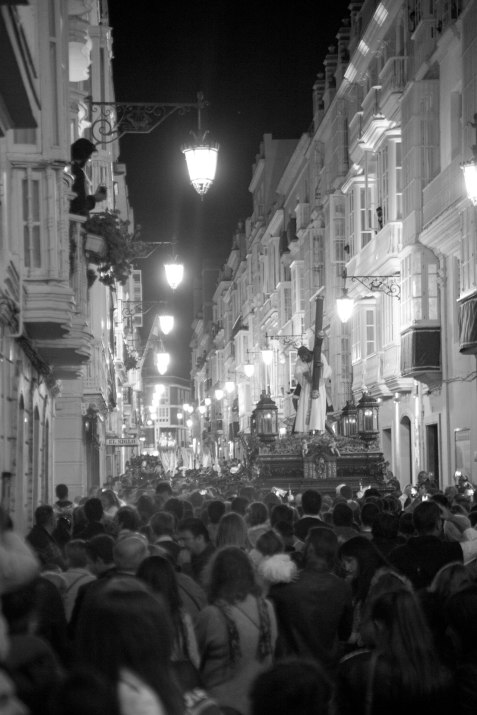 The contrast of the somber music and the joyous crowds. The mystique and hypnotically wobbling crowds. The pure scale of it all.  This was, without a doubt, the best celebration I’d witnessed on my travels.

The past night had been so bizarre and unique that I’d easily have thought it to be a dream, if it were not for my aching head and trampled feet. My last stops in Spain wold show but an imitation of what I’d experienced in Seville and Cádiz. The past two days had showed that, despite having experienced nearly all European nations and their cultures first hand, there was still room for striking surprises and feelings of that great kind of alienation to be found on my home continent. And on this third visit of mine to Spain, I’d become even more enamored with the quality of life and the people living it here.

But it was time, once more, to leave for the border. It would only be a short bus ride.